Apocalypse Now, and Then What? Beckett’s ENDGAME at PICT

Life comes at us in cycles. Spring has returned to Pittsburgh; the birds are singing once again, and after a relative lull of many years, it might be time again to worry about nuclear annihilation. That would make it a fitting time to see Samuel Beckett’s Endgame at PICT Classic Theatre (through May 28).

Endgame is a post-apocalyptic play. You could call it one of the granddaddies of the modern end-of-the-world genre, as it was written during the 1950s and premiered in 1957, during the early Cold War years when bomb fear ran high. But Endgame has a distinctive quality of its own. It’s a Beckett story. Which means it is not simply a cautionary tale about humankind’s capacity for mass self-destruction. It’s more a depiction of how comically and sadly wacky a species we are to begin with.

All of Endgame takes place in a spacious but shabby room of an old house. Outside, a cataclysm of unspecified nature has descended over the world. As one character reports, having mounted a step-stool to peer out through the room’s high windows, there appears to be no more day or night or sunrise or sunset. The sky is perpetually gray. Off in the distance, at the seashore, there are no tides. Supply chains have stopped, too. As this character reports further, in response to queries from other persons in the room, there are no more sugar plums, painkillers, or coffins to be had.

The man providing grim updates is the house servant, Clov, pronounced “Clove” and played by James FitzGerald. His master, Hamm (Martin Giles), is a frightening tyrant: blind, unable to walk, and kept alive in a throne-like armchair. Hamm issues imperious commands—blowing shrill blasts on a referee’s whistle when he wants Clov to come hobbling to his aid—and Hamm is also an incurable ham. He’s got little else to do except tell stories and fire off witty remarks. His soliloquies are in the key of ghastly humor and are meant, it seems, to entertain his housemates as well as himself.

Along with Hamm and Clov, the little band includes Nagg and Nell (Ken Bolden and Karen Baum). They are Hamm’s elderly dad and mum. Each parent dwells in a solitary-confinement-type hole, down at the bottom of a trash can. When Nagg surfaces and demands food, he’s given a dog biscuit. At least some of those are in stock.

Amazingly, Endgame elicits laughs or at least chuckles along the way. Although each person’s situation is desperate, and seems to have been that way even before the cataclysm, the characters don’t wallow much in despair. They wrestle with it, try to philosophize over it, clown and rag one another about it. Beckett demurred at being classified an existentialist, but many exchanges in the play come across as existential foxhole humor. Hamm to his father: “Why did you engender me?” Nagg: “I didn’t know that it’d be you.” And when Clov asks “Do you believe in the life to come?”, Hamm says “Mine was always that.”

Physical comedy occurs frequently as well. The actors deserve much credit for pulling it off, since all are limited in what they can do. Hamm is confined to his chair and can’t stand; Clov has a stiff leg and can’t sit. (“Every man his specialty,” Hamm observes.) Nagg and Nell appear only when they pop up above the rims of their trash cans, which makes them canned talking heads; actors Bolden and Baum do a fine job of making them vividly talking heads. 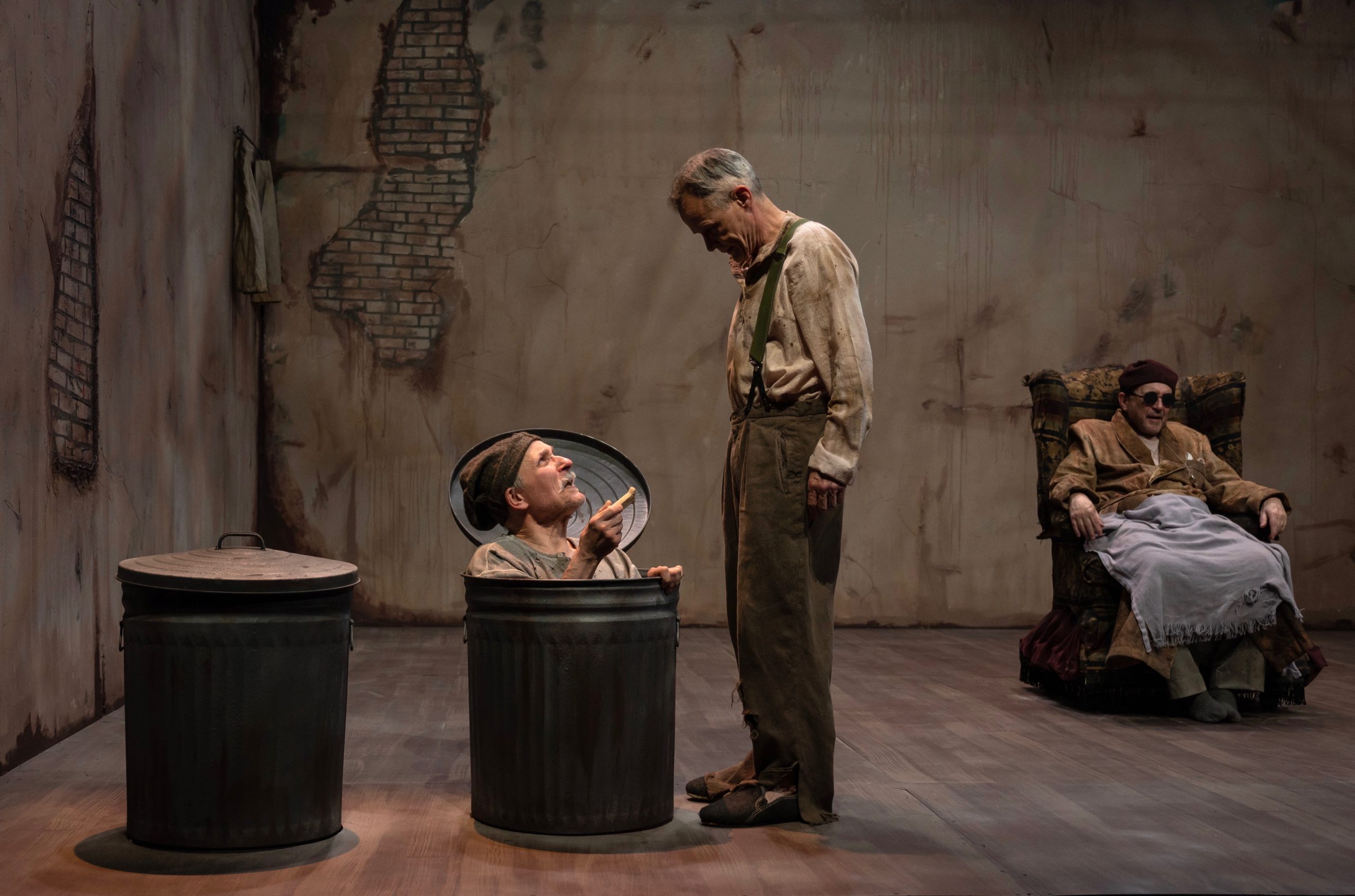 Nagg (Ken Bolden, in the can) has a bone to pick: a dog-bone biscuit.

And what about the plot? With Beckett, that’s the wrong question. His Waiting for Godot has been praised as great despite being a play where nothing happens. Endgame may have it beat in the latter department. Even more nothing happens. The play’s title comes from chess, but with an ironic difference. In chess, a good endgame is a series of moves that will win or force a draw. The characters in Endgame are like the ditzy players who get nowhere while breaking the you-touch-it, you-move-it rule: Hmm, king to here? Nope. Bishop to there? Uh-uh …

Endgame does deliver emotional impact. One feels a rising tension, for example, in the interplay between master Hamm and servant Clov. The pair are not like Pozzo and Lucky in Godot, where you have a brutal overlord being always beastly to his poor slave. They’re maybe more similar to the loopy-master-and-salty-servant duos that you find in Shakespeare. Hamm has wild ideas and makes bizarre demands. Clov has seen the drill before and he’s ready with comebacks. He won’t stand for that crap. But then again, he does, doesn’t he? …

What struck me strongest, throughout the play, was watching Hamm. Great villains are despicable and yet fascinating. They make you laugh; make you feel for them; almost root for them, which is what makes them dangerous. And so it is with masterful bullies. Each is a terribly clever but ultimately terrible spoiled child writ large. Hamm had me shuddering inside. Reminded me of some people I’ve known. He is a monster.

Endgame has been extensively analyzed by scholars and critics. I’ll leave you with a view I found entertaining.

Around here we don’t normally quote from Wikipedia, as the articles are not intended to be primary sources. They’re supposed to be summaries pulled together from reliable sources elsewhere. On a recent visit to the Endgame page, however, one marvelous, unsourced passage stood out:

That should cover it.

Endgame is directed for PICT Classic Theatre by Alan Stanford, the company’s Artistic and Executive Director. Through May 28 in the Fred Rogers Studio at WQED, 4802 Fifth Ave., Oakland. Visit the PICT website for tickets and further information.

Scenic design for the play is by Stanford, Carly Trimble-Long, and Domenico Lagamba. Trimble-Long also serves as production and technical manager. Costumes are by Joan Markert, lighting by Nicole White, and sound by Kris Buggey. Stage manager is Cory Goddard, assisted by Christen Krasch. A host of others pitched in, and let’s give a shout-out in general to PICT, now in its 25th anniversary season.