The difference between “Theatre” and “Theater” is often confusing for people – some think it just may be a typo, that it’s the same exact thing, or that it’s just a way to sound uppity. In actuality, the two words have completely different meanings.

In short, “Theater” is used when you are talking about a specific location. In other words, a theater is the venue or building where a performance happens (e.g. movie theater, Charity Randall Theater, etc.). “Theatre” is used to describe the art form (e.g. theatre arts, theatre troupe, etc.). So, since we are an organization dedicated to the art form, we are called PICT Classic Theatre.

“Why are there two different spellings anyway?”

The long version of the story, however, goes back to the 1500s. The English speaking world’s preference between “theatre” and “theater” fluctuated in the 1550s when the word “theatre” became en vogue. So, while Chaucer and other writers from the Middle Ages used “theatre”, Shakespeare and others used “theater”. Around 1700, the British started to emulate the French language more, which included bringing back the “-re” ending to theater (the more Germanic spelling).

A portrait of Noah Webster

In 1828, Noah Webster, co-creator of the Merriam-Webster Dictionary, sought to reform the English language to remove any connection to England; he wanted to make the language something unique to America. So yes, you can thank him for color vs. colour and other spelling differences between England and America. Webster actually referred to the French influence on English as “egregious corruptions”, so most of his adaptions involved the removal of French affectations from words. This meant changing “theatre” back to “theater”.

“Then theatre IS just a fancy British spelling!”

Well, not quite – the story doesn’t end here. See, there were a ton of British actors working in America. They thought that this spelling change was ridiculous and still enforced the traditional spelling. This was just the tip of the iceberg, though. The early 1800s were a time of huge unrest between Americans and British. Americans were trying so hard to form their own identity that they alienated and rejected anything British, normally through hatred and slander. 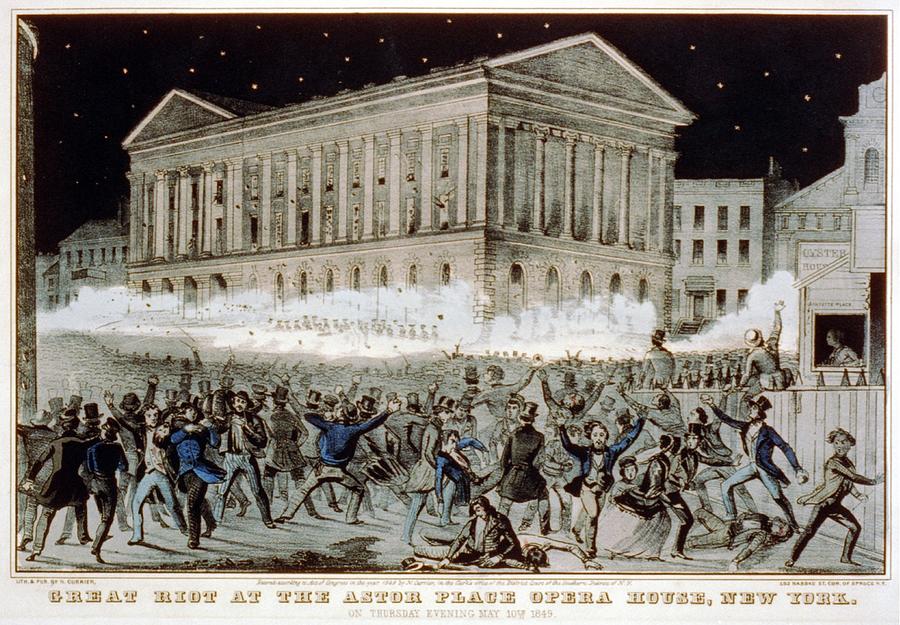 A cartoon depiction of the Astor Place Riot (1849)

Basically it was like America was going through their rebellious college phase after leaving their parents for the first time. Naturally, the British were upset that they were being treated in such a way and demanded that certain traditions and attitudes were upheld. These tensions led to events like the Astor Place Riot – a tremendous fight that pitted American actors and theatregoers against British actors and theatre goers, leaving 22+ people dead.

“So you’re not PICT Classic Theater because you want to show off your UK roots?”

It ended up not being as simple as British vs. American in the end. So many people were set in their ways of spelling that it became impossible to impose one true spelling. In fact, the modern Merriam-Webster Dictionary accepts both spellings. Despite this, the use of “theatre” has fallen drastically over the last century. Within the world of theatre, the aforementioned usage differences are mostly accepted. Everyone else, however, is in debate of the validity of that. There really is no linguistic proof of those definitions; it seems to be a matter of preference. A lot of actors and theatre practitioners take this very seriously, however, and insist on the correct usage of the words.